Businesses Lining Up for Service in Longmont, FTTH Build-Out Studied

In January, Longmont Power and Communications (LPC) announced they would begin connecting businesses located within 500 feet of the existing network. As we reported, local businesses were chomping at the bit to get hooked up and enjoy the high-speed next generation network. Even without efforts at marketing or advertising, more businesses have added themselves to the queue. LPC will present the formal business plan for expanding the network to the City Council on May 14th. Tony Kindelspire recently reported on the race to get on LPC's network in the Longmont Times-Call:

"We are bringing to council a business plan to build out all of Longmont," [Vince] Jordan, [Broadband Services Manager], said. "It's the whole enchilada."

The fact that there has so far been only limited rollout is due to economics. Currently, the installations are being paid for from a reserve fund that Longmont Power has built up over the years leasing portions of its fiber-optic loop to entities such as Longmont United Hospital and a third-party provider that services the school district. Those leases bring in about $250,000 annually, Jordan said.

For 2013, the Longmont City Council authorized LPC to use $375,000 of that reserve fund to begin connecting businesses and residents to the loop.

This model works, but does not connect everyone fast enough for their liking:

To expedite the build-out, extra up-front dollars will have to be allocated, but where those dollars will come from is yet to be determined, Jordan said, adding that ultimately, the decision will lie with City Council. 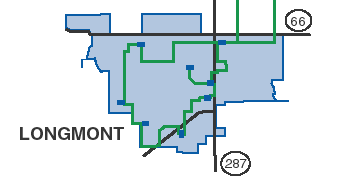 Right now, Longmont will cover the initial cost of connecting subscribers except in cases of extraordinarily high cost cases. If it would cost $10,000 to install but the payback to the utility in 2.5 years is only $6,000, a customer would have to cover the $4,000 difference presently. While there are over 1,300 businesses with in 500 feet of the network, connection costs vary depending on proximity to roads, structures, and geography.

"We're really focused on economic development, so the ones that will put the most dollars (they save on broadband costs) back into their business, those are the ones we're working with first."

Businesses and organizations that are on the network appreciate fast symmetrical service, affordability, and the fact that they get service from the city rather than a commercial provider:

"I emailed Vince asking when I could get on," said Michael Jurey, network/telecommunication specialist for Longmont Clinic. "Luckily, the loop ran right by Longmont Clinic. On our side of the street no less."

Jurey said the city's network is three times faster than the speeds the clinic got before at a cost savings of $1,600 a month.

"We use it for two reasons," said one of the other three owners [of the Pumphouse, a restaurant and brewpub in Longmont], Dave D'Epagnier. "No. 1 is our business functions -- we process credit cards with it ... just normal day-to-day business activities. Plus, it's a big place, and we could have 50 customers that are using the broadband all at once."

The other thing that attracted him and the other owners was that the business was finally able to tap into the city-owned network after so many years of having to buy high-speed service from a commercial provider. And that is all thanks to the voters, D'Epagnier said.

According to a Scott Rochat article in the Times-Call, the business plan for a FTTH network to anyone in town is possible within three years with a $41 million investment. That plan eliminates the usual $500 - $15,000 hook-up fee:

"We have to be competitive," said Tom Roiniotis, director of LPC. "None of the incumbents charge an install fee, so we won't as well." 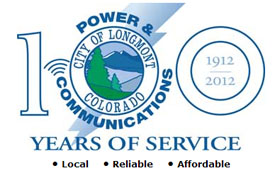 If LPC wants to pursue a triple play offering, Uptown estimates it would cost another $6 million. At this point, LPC does not consider triple play a good investment:

"The young generation that's active now, they don't watch TV in the conventional way," Jordan said. At a recent presentation, he said, when he asked a college student how often he watched traditional scheduled TV programming, the response was "Never."

According to a survey conducted for the business plan, about 68 percent of respondents said they would either definitely or probably switch to the city for Internet service if it were cheaper than existing services. Only about 20 percent said they had a "triple play" or wanted it.

Uptown's estimates were based on a take rate of 35% and the business plan estimates a broadband utility to be in the black within four years and to pay for itself in ten years.

If the city council considers the plan favorable, it will go to the city finance department for more detailed review.

Here is a quick video from LPC, as technicians install connections at the Pumphouse:

This video is no longer available.