How Chattanooga, Bristol, and Lafayette Built the Best Broadband in America 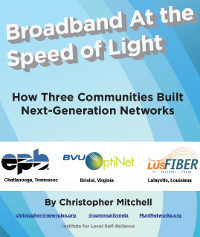 We are thrilled to finally unveil our latest white paper: Broadband At the Speed of Light: How Three Communities Built Next-Generation Networks. This report was a joint effort of the Institute for Local Self-Reliance and the Benton Foundation.

We have chronicled how Bristol's BVU Authority, Chattanooga's EPB, and Lafayette's LUS built some of the most impressive broadband networks in the nation. The paper presents three case studies and then draws lessons from their common experiences to offer advice to other communities.

Here is the press release:

The fastest networks in the nation are built by local governments, a new report by the Institute for Local Self-Reliance and Benton Foundation reveals

Chattanooga, Tennessee, is well known for being the first community with citywide access to a “gig,” or the fastest residential connections to the Internet available nationally. Less known are Bristol, Virginia, and Lafayette, Louisiana – both of which now also offer a gigabit throughout the community.

A new report just released by the Institute for Local Self-Reliance (ILSR) and the Benton Foundation explains how these communities have built some of the best broadband networks in the nation. Broadband At the Speed of Light: How Three Communities Built Next-Generation Networks is available here.

“It may surprise people that these cities in Virginia, Tennessee, and Louisiana have faster and lower cost access to the Internet than anyone in San Francisco, Seattle, or any other major city,” says Christopher Mitchell, Director of ILSR’s Telecommunications as Commons Initiative. “These publicly owned networks have each created hundreds of jobs and saved millions of dollars.”

“Communities need 21st century telecommunications infrastructure to compete in the global economy,” said Charles Benton, Chairman & CEO of the Benton Foundation. “Hopefully, this report will resonate with local government officials across the country.”

Mitchell is a national expert on community broadband networks and was recently named a “Top 25 Doer, Dreamer, and Driver” by Government Technology. He also regularly authors articles at MuniNetworks.org.

The new report offers in-depth case studies of BVU Authority’s OptiNet in Bristol, Virginia; EPB Fiber in Chattanooga, Tennessee; and LUS Fiber in Lafayette, Louisiana. Each network was built and is operated by a public power utility.

Mitchell believes these networks are all the more important given the slow pace of investment from major carriers. According to Mitchell, “As AT&T and Verizon have ended the expansion of U-Verse and FiOS respectively, communities that need better networks for economic development should consider how they can invest in themselves.”

Broadband At the Speed of Light: How Three Communities Built Next-Generation Networks is available here.

About ILSR: Institute for Local Self-Reliance (ILSR) proposes a set of new rules that builds community by supporting humanly scaled politics and economics. The Telecommunications as Commons Initiative believes that telecommunications networks are essential infrastructure and should be accountable to residents and local businesses.

About Benton: The Benton Foundation works to ensure that media and telecommunications serve the public interest and enhance our democracy. We pursue this mission by seeking policy solutions that support the values of access, diversity and equity, and by demonstrating the value of media and telecommunications for improving the quality of life for all.