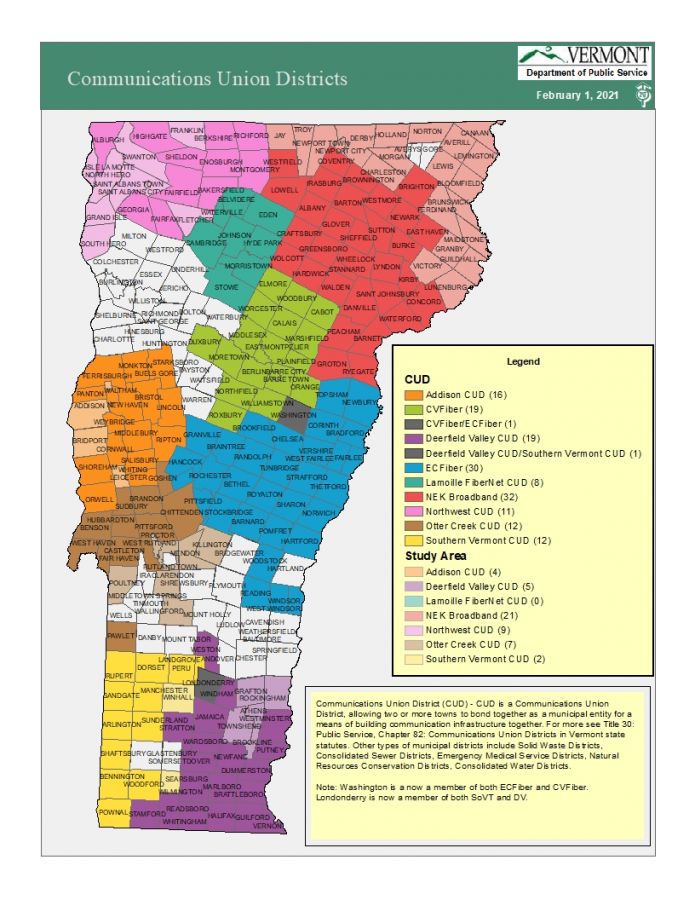 A bill dedicating $150 million of anticipated federal funding to create a new state broadband office to coordinate and accelerate the expansion of high-speed Internet access throughout Vermont passed the State House of Representatives last week with overwhelming bipartisan support.

On March 24th, the Vermont House approved H.B. 360 by a vote of 145-1, backing the creation of the Vermont Community Broadband Authority. If the bill becomes law it would help fund and organize the deployment of broadband infrastructure between Vermont’s nine Communications Union Districts (CUDs) and their potential partners, which include electric distribution utilities, nonprofit organizations, the federal government, and private Internet Service Providers (ISPs).

The bill was introduced in the state Senate last Friday, and discussed for the first time in the Senate Finance Committee on Wednesday.

Enabled by a 2015 law, CUDs are local governmental bodies consisting of two or more towns joined together to build communications infrastructure. They were established to create innovative solutions to build broadband networks and provide a combination of Fiber-to-the-Home and fixed wireless Internet connectivity in their respective territories across Vermont, especially in areas where incumbent ISPs fail to provide adequate service.

Vermont’s CUDs, which have called for federal funding assistance since the onset of the pandemic, are ideally positioned to distribute funds in a way that will provide reliable and high-performance Internet access to every nook-and-cranny of the state. Vermont’s active CUDs have already constructed deep pockets of fiber.

Whether or not the CUDs will be able to reach the state’s goal of delivering universal 100/100 Megabits per second (Mbps) Internet service by 2024 now rests in the hands of Vermont’s Senate, Congress, and the Biden Administration as state and federal lawmakers wrestle with how to best expand access to broadband.

The U.S. government has not yet provided guidance on how states will be able to distribute the federal dollars headed their way. In this sense, amendments added to H.B. 360 before it passed Vermont’s House, increasing the bill’s appropriation from an initial $30 million to $150 million, reflect the CUDs call for federal funding and state lawmakers' desire for the federal government to establish rules that give states flexibility to utilize the funding how they see fit.

As of yet, it appears one of the main sources of broadband infrastructure funding allocated under the American Rescue Plan Act, the Coronavirus Capital Projects Fund, will be awarded in the form of state block grants. States will be awarded between $100 million and $500 million in block grants for capital projects, which include building improved telecommunications networks at a time when remote work, education, and telehealth are more prevalent than ever.

Vermont’s CUDs are hoping little to no constraints are placed on how states can spend incoming federal grant money. In conversation with ILSR, Carole Monroe, CEO of ValleyNet (the operations company of Vermont’s first fully-operating CUD, ECFiber) expressed deep frustrations about the strings that were attached to CARES Act funding. Recipients of CARES Act money were required to spend the funds within months of it being distributed. Monroe lamented the fact that it forced recipients to pursue short-term solutions.

“By the time it reached the state, it was too late to do anything except a few wireless access points here or there,” said Monroe.

“We’ve all been hoping for an infrastructure bill, but I think there will be many strings attached,” she said, cognizant of her past experiences with bureaucratic contingencies on funding. If the funding comes in the form of “block grants to the state it will make it much easier to move forward” because Vermont has a strategic and well-developed plan.

Based on a Magellan Advisors’ report commissioned by Vermont’s Department of Public Services, it is estimated that it will cost $1 billion to deploy broadband infrastructure to the estimated 254,000 locations (82 percent of Vermont) that currently lack 100/100 Mbps symmetrical service (see inline map below, or high-resolution version at the bottom of this story).

CUDs have historically had limited access to the financial capital necessary for expansion into unserved and underserved areas of the state, as previous broadband grant programs have not offered the scale to solve the problem, and traditional funding sources tend to shy away from investing in entities with limited revenue history and little collateral.

Though private investors are beginning to show interest in funding CUDs initiatives, Vermont’s CUDs see the incoming federal funding as a rare opportunity for the infusion of start-up capital initially necessary for CUDs to be financially self-sufficient.

Monroe said that in order for CUDs to be self-supporting they need enough capital for three years of audited financials, three years of positive cash flow, and three years of positive EBITDA (Earnings Before Interest, Taxes, Depreciation, and Amortization). After getting CUDs to that point, they would then be able to access the municipal bond market, in which interest on money borrowed is not taxable.

While H.B. 360 will help by developing favorable taxing, financing, and regulatory mechanisms to support CUDs, Monroe suggested that it may also make sense for some of Vermont’s smaller CUDs to work together, consolidating Vermont’s nine CUDs into perhaps five or six. Some of the CUDs are very small (serving only about 10 rural towns), which may make it more difficult to gain return on investment.

At the heart of H.B. 360 is a call for increased partnerships to deliver resilient last-mile broadband infrastructure. It will be interesting to follow Vermont’s CUDs to see what entities they end up partnering with, as each partnership is likely to be unique. Last Friday, Consolidated Communications, a major provider of Internet service in the region, responded to a CUDs request for proposal, demonstrating that the private ISP is willing to partner with the CUDs to deliver high-speed Internet service.

According to Monroe, a large portion of ECFiber’s 6,000 current subscribers switched from Consolidated Communications, so the company quickly learned they needed to improve its service and/or partner with the CUDs to remain viable in the state.

Consolidated Communications could be a desirable partner for Vermont’s CUDs given that they already have access to many pole attachments throughout the state. This will save CUDs from spending already-limited funds on utility pole attachments and make-ready work that often leads to increased costs in the buildout of broadband networks.

Another potential partner for CUDs is Green Mountain Power (GMP), the major electric utility in Vermont, which recently reached an agreement with the Department of Public Service to cover the costs of up to $2,000 for make-ready work in each of the utility’s unserved locations. With 7,500 unserved locations in the utility’s service area, the agreement would reduce the cost of building broadband networks within their footprint by as much as $15 million. Many CUDs are working to calculate how the cost-savings agreement could significantly advance their efforts to expand broadband into unserved regions.

The electric utility’s contributions would also help bring equity to Vermont’s energy sector. Currently all Vermont electric ratepayers are contributing to the rollout of clean energy technologies, yet not all ratepayers are able to access those technologies because they do not have access to adequate broadband.

See a high-resolution map of locations served by 100/100 Mbps in Vermont here.