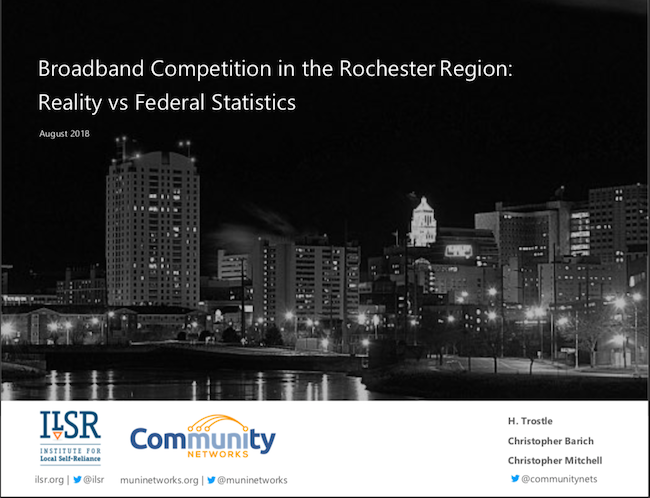 It’s no secret that the Federal Communications Commission’s (FCC’s) broadband data is unreliable. Many people, including U.S. Senators, have pointed out how federal data collection methods overstate connectivity across the country. Rochester, Minnesota, is no exception. In this policy brief, we highlight the gulf between FCC broadband data for Rochester and what’s actually available to residents by examining local competition.

What’s Going On in Rochester

The city, home to the world-famous Mayo Clinic, had previously considered building a municipal network, but the idea was dropped, in part because of the incorrect perception that enough competition already exists between Internet service providers. Our analysis and the corresponding maps reveal that broadband competition in the region is more limited than many realize.

As we’ve covered before, the FCC collects data by census block, which incorrectly inflates broadband access and competition data. Internet service providers self-report and describe an entire block as “served” even if they can only connect one address in that census block.

We describe the problems with self-reporting in the policy brief:

“Large, de facto monopoly providers have incentives to overstate their coverage and territory to hide the unreliable and slow nature of their service in many communities. Small providers often have trouble completing the FCC Form 477. . . Larger providers have plenty of staff to handle the form and seem to benefit the most from its flaws, as this data is often used to determine whether government programs should invest additional funds into an area, often by a competitive grant program. Areas that appear to be well covered will not result in more investment, leaving the incumbent providers without fear of competition.”

In our analysis, we discovered evidence that at least one provider in Rochester had exaggerated its download speeds when submitting FCC Form 477 by a factor of 24.

We found that fewer people in the Rochester region have access to high-speed Internet services than the FCC reports. From the brief:

“About 215,000 people live within a 30-mile radius of Rochester’s city center. According to the FCC data, everyone has access to a broadband provider. At least 4,000 people near Rochester, in fact, do not have broadband access.”

In rural areas surrounding Rochester, at least 42,000 people do not have access to wireline connectivity, relying on less dependable fixed wireless services to connect to the Internet. 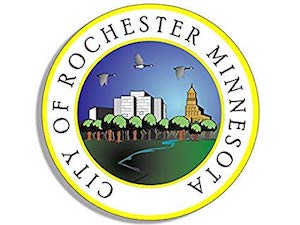 Within Rochester city limits, most residents have access to broadband and limited competition, with Charter Communications and CenturyLink vying for subscribers. For about 19,000 people, however, Charter is the only Internet service provider offering speeds that meet the FCC’s minimum standard for broadband. If a Rochester resident wants or needs faster Internet access speeds, competition drastically declines; more than half of all residents can only access 100 Mbps download speeds through Charter.

The eight maps presented in the policy brief further explore broadband competition in and around Rochester, with varying levels of detail. Three maps take a wideer view of the region, displaying the digital divide between Rochester and its rural neighbors. The remaining five maps focus in on the city, showing which neighborhoods have a choice among multiple Internet service providers and which are stuck with one monopoly provider.

“Overall, Charter and CenturyLink compete for the urban center of Rochester, while the rural areas rely almost exclusively on fixed wireless for broadband service. Even where residents have a choice in broadband, anyone looking for speeds in excess of 40 Mbps will almost certainly have to subscribe to Charter Spectrum. This is why more cities, especially those with municipal electric services, are considering how smart local investments can ensure more consumer choices and a working market for these essential services.”

Download the policy brief Broadband Competition in the Rochester Region: Reality vs Federal Statistics to view the maps and learn more.