Going Wireless for Students and Seniors in Tucson 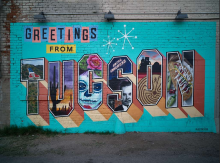 When Collin Boyce, the City of Tucson’s Chief Information Officer, was a young boy, he left his native island country of Trinidad and Tobago with his mother and three brothers and moved to  Brooklyn, New York.

“We were poor but what my mother did for us in the summertime is send us to computer camps. And because of those camps three of us are in the IT industry today and the one we call the black sheep of the family is a neurosurgeon,” Boyce said.

He was joking about his neurosurgeon brother of course. But was dead serious about how being introduced to computer technology as a young kid led him into IT work and why it means so much to him to help build Tucson’s new municipal wireless network to provide Internet connectivity for low-income school students and seniors.

“This effort is an opportunity to give back what my mother gave me,” he said.

Tucson has hundreds of miles of fiber connecting the city’s municipal buildings. But, unlike a city like Chattanooga, which operates one of the premier Fiber-to-the-Home networks in the nation allowing America’s first Gig City to provide free high-speed Internet access to 12,000 low-income students in Chattanooga throughout the ongoing pandemic, Tucson has not built a fully fiber-optic municipal broadband network.

As the COVID crisis swept across Arizona and forced students to attend school remotely last spring, Boyce began to look for a way to ensure that the thousands of students who didn’t have Internet access at home wouldn’t be left behind. In a city with a population of about 530,000, an estimated 30 percent of city residents, or about 150,000 Tucsonans, don’t subscribe to wireline broadband, Boyce said.

Standing Up a New Network

“We needed to stand up some wireless technology,” he told us this week.

The stop-gap solution the city decided on was a Citizens Band Radio Service (CBRS) network that was financed using $5.1 million in CARES Act funds to leverage the city’s existing fiber infrastructure. Partnering with the IT management company Insight to help build the network and provide customer service, the construction work started in January and is already nearly finished. It involves erecting towers on fiber-connected municipal buildings and city-owned property at strategic locations across the city and installing converter devices that look...