Anyone who tells you that UTOPIA is a "success" or that it is a "failure" is probably minimizing important problems or victories for the network. The Utah Telecommunication Open Infrastructure Agency, like so many other things in life, is a mixed bag.

For those new to UTOPIA, it is a large multi-community full fiber network that operates by only selling wholesale access to service providers. Due to a law designed to protect incumbent service providers under the guise of protecting taxpayers, UTOPIA cannot offer any services itself and is strictly open access.

For a variety of reasons - that have not and likely will not be repeated by other communities - the network has not yet met expectations. The costs have been greater than expected and the network does not yet cover its entire intended territory (some 16 communities and 140,000 people).

However, where it does operate, it is blazing fast. The service providers offer the fastest speeds at the lowest prices (see a service comparison). It has offered a tremendous competitive advantage to the businesses and communities in which it operates.

Last year, Lawrence Kingsley wrote "The Rebirth of UTOPIA" that explored where the network went wrong and how it has also succeeded. Perhaps most notably, he notes that the churn rate (people switching to other networks) is ridiculously low at .5% - a common trait to community owned networks.

Last month, Geoff Daily reported on how UTOPIA is "Transforming Failure Into Success." They have greatly improved their marketing practices - which has historically been a large barrier to success. This is an important lesson for all - even though there are very few competitors in the broadband market, they do fight fiercely for subscribers. Broadband is competitive like boxing, not like a marathon.

But the news coming out of Utah is not all cheery. Jesse, the resident UTOPIA expert, has recently explained some of the current financial problems and their origin.

Perhaps the most important lesson to take away from UTOPIA is that plans always go awry. I have yet to find a community that did not have unexpected problems along the way to building their networks. Communities that take...

Nation's Largest Citywide FTTH Network to be Completed Next Year 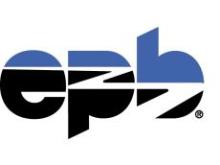 Chattanooga, Tennessee is predicting it will offer FTTH in its entire service area by next year. The public power company has used fiber-optics in the past to manage its electrical operations and has been planning to offer a full FTTH network for awhile.

"There are two primary components to building this system. One component is taking longer than we thought and the other is happening much faster than we anticipated", said Harold DePriest, President and CEO. "The end result is that services will be available to the entire cities of Chattanooga, East Ridge and Red Bank by summer of 2010."

DePriest says once in place, EPB's fiber optic network will be the largest of its kind in the country.

However, Chattanooga has suffered the same problem that has plagued other publicly owned broadband projects around the country: incumbent telco and cableco lawyers. Comcast has sued Chattanooga in multiple courts in an attempt to limit competition (see here, here, here, and here for a few examples). As with these cases across the country (from Monticello, MN to Bristol, VA, to Lafayette, LA), the incumbents have lost the cases but successfully slowed the build-out, which hurts the community while padding company profits for an extra couple of years.

The network will offer symmetrical speeds of 10-50Mbps while keeping costs lower than the standard prices in the market.

Larry Press takes a rather quantitative approach to demonstrating that the deregulatory telecommunications policies of the past few decades have failed to produce the desired outcomes. We are currently at a key turning point in history: the policies we enact today will have repercussions throughout the entire decade. Fiber is replacing copper, the question is who will own it because owners make rules.

During the last 25 years, telecommunication has moved away from government–owned or regulated monopolies toward privatization with competition and oversight by independent regulatory agencies — PCR policies. We present data indicating that PCR has had little impact on the Internet during the last ten years in developed or developing nations, and discuss the reasons for this. We then describe several ways government can go beyond PCR, while balancing needs for next generation technology, decentralized infrastructure ownership, and immediate economic stimulus. We conclude that there is a need for alternatives to the expedient action of subsidizing the current Internet service providers with their demonstrated anti–competitive bent. The decisions we make today will shape telecommunication infrastructure and the industry for decades.

We consider how government-owned enterprises affect privately owned rivals. Specifically, we compare the types of markets that municipally owned telecommunications providers in the United States serve to the types of markets that competitive local exchange carriers (CLECs) serve. We find that CLECs focus on potential profitability while municipalities appear to respond to other factors, such as political considerations or the desire to provide competition to incumbents. As a result, municipal providers tend to serve markets that CLECs do not. We also find that the presence of a municipal provider in a market does not affect the probability that a CLEC also serves that market. Our results suggest municipalities may not pose a significant competitive threat to CLECs and do not preclude CLEC participation.

There are 2,007 municipalities across the United States that provide electricity service to their constituents. Of these, over 600 provide some sort of communications services to the community. An important policy question is whether or not public investment in communications crowds out private investment, or whether such investment encourages additional entry by creating wholesale markets and economic growth. We test these two hypotheses – the crowding out and stimulation hypothesis – using a recent dataset for the state of Florida. We find strong evidence favoring the stimulation hypothesis, since public investment in communications network increases competitive communications firm entry by a sizeable amount.

Public Networks are not Subsidized by the Government

Posted May 7, 2009 by Christopher Mitchell

Who Will Own Minnesota's Information Highways? 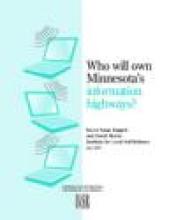 Competitive broadband service and pricing is within reach of most Minnesotans if anti-competitive polices and practices are removed and municipal governments build broadband infrastructure, according to a new report released today by the Institute for Local Self-Reliance (ILSR). The findings are contained in "Who Will Own Minnesota's Information Highways?", a report issued by the New Rules Project of the Institute for Local Self-Reliance.

"But to make that a reality, Minneapolis city leaders must revisit their decision to depend on a private company for future information needs," Daggett warned. "Given that Minneapolis has spent the last 10 years trying to get its cable company to live up to the provisions of its original franchise contract, it is remarkable that it wants to travel that same privately owned information highway in the future."

When cities offer broadband services, the competition with private companies drives prices down and improves service. The experiences with community-owned systems in Buffalo, Chaska, and Windom, Minnesota support that conclusion. The city need not act as a service provider, however. Publicly owned networks in Philadelphia and Western Utah will sell network access to private service providers, who will in turn sell services to consumers.

Many private, often incumbent and monopolistic, providers use the term "level playing field" as code for ensuring communities are unable to build their own networks. They do not actually want a "level playing field," they want more advantages for their businesses.

Consider the fight in 2009 over this issue in North Carolina:

HB 1252 would create extraordinary financial accounting and administrative burdens on municipal broadband providers that would render their existence fiscally difficult, if not impossible. The bill also subjects municipalities to the new jurisdiction of the North Carolina Utilities Commission, while not requiring the same of private providers. Also troubling is the injunctive relief provision, which could encourage litigation for purposes of gaining competitive advantage. Furthermore, the legislation appears to prevent municipalities from pursuing alternative funding sources, such as broadband grant programs included in the Federal stimulus bill, the American Recovery and Reinvestment Act of 2009. Source: Save NC Broadband Blog

Additionally, the process in North Carolina reveals the extent to which private providers like Time Warner buy legislation in some states.

While big companies like Time Warner Cable pretend to be the underdog compared to community networks, the reality is that big national corporations have far more advantages than any local government. We created this video to illustrate the point:

Cable and telephone companies are able to cross-subsidize their networks - they can charge more in the areas they serve where there are no competitors in order to charge less in a competitive community. Numerous state and federal laws prohibit public entities from cross subsidizing across services. Further, when private companies are forced to have open meetings and disclose their business plans like their public sector counterparts, we will be closer to a "level playing field."