The Empire Lobbies Back: How National Cable and DSL Companies Banned The Competition in North Carolina 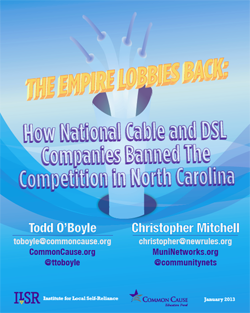 Wilson’s decision and resulting network was recently examined in a case study by Todd O’Boyle of Common Cause and ILSR's Christopher Mitchell titled Carolina’s Connected Community: Wilson Gives Greenlight to Fast Internet. This new report picks up with Wilson’s legacy: an intense multiyear lobbying campaign by Time Warner Cable, AT&T, CenturyLink, and others to bar communities from building their own networks. The report examines how millions of political dollars bought restrictions in the state that will propagate private monopolies rather than serve North Carolinians.

Download the new report here: The Empire Lobbies Back: How National Cable and DSL Companies Banned The Competition in North Carolina

These companies can and do try year after year to create barriers to community-­‐owned networks. They only have to succeed once; because of their lobbying power, they have near limitless power to stop future bills that would restore local authority. Unfortunately, success means more obstacles and less economic development for residents and businesses in North Carolina and other places where broadband accessibility is tragically low.

It certainly makes sense for these big companies to want to limit local authority to build next-­‐generation networks. What remains puzzling is why any state legislature would want to limit the ability of a community to build a network to improve educational outcomes, create new jobs, and give both residents and businesses more choices for an essential service. This decision should be made by those that have to feel the consequences—for better and for worse.

This story was originally posted on the ILSR website.