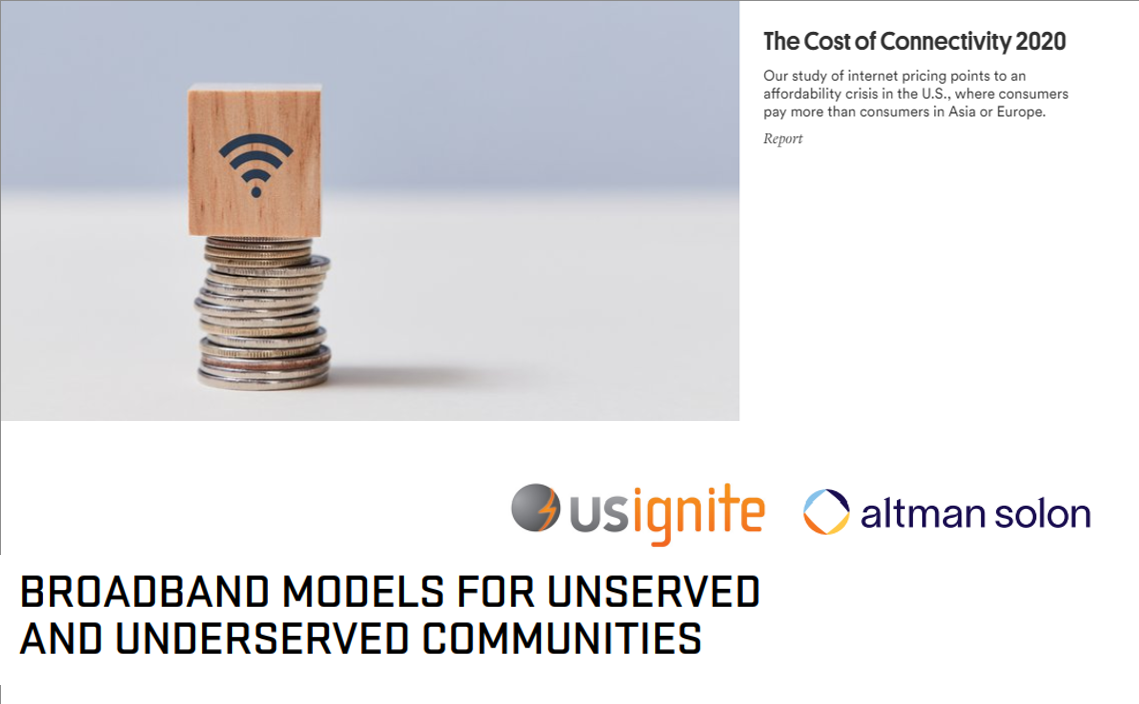 July has seen the release of two complementary reports which shed light on two of the topics we care about a great deal around these parts: availability and affordability of Internet access, and municipally-enabled networks.

The Open Technology Institute at New America recently released “The Cost of Connectivity 2020” [pdf], which digs into the factors (some of which are explicit and others hidden) dictating how much Americans can expect to spend for Internet access in comparison to Europe, Asia, Canada, and Mexico. They conclude that, compared to the rest of the world, a lack of competition, regulation, and accurate data collection by the FCC has led to higher prices, slower speeds, exorbitant data cap fees, and deep digital divides running between those with high-speed access and those in Black, Indigenous, and People of Color (BIPOC) communities and low-income parts of American cities. And among its most compelling policy recommendations — based on data points from 296 standalone Internet plans in the United States — is that municipal networks offer a solution.

If OTI’s report outlines the deep and persistent problem of connectivity in the United States, US Ignite and Altman Solon’s “Broadband Models for Unserved and Underserved Communities” [pdf] provides a clear and thoughtful roadmap for local communities who ask “What can we do?” Above all else, the guide shows that high-speed broadband is a solvable proposition, and sketches out five models for local governments to follow according to their unique conditions. Like the OTI report, US Ignite and Altman Solon highlight the many inherent benefits of community-enabled networks.

Digging into the Data

The OTI report is based on data from 760 standalone Internet plans across 28 cities in North America, Europe, and Asia collected between June 2019 and March 2020 (though it also incorporates lessons learned from the current public health crisis). Across every type of connection (DSL, cable, and fiber) it found the U.S. to lag behind in at least one metric. See the research team’s main takeaways below:

The report shares a number of instances that are particularly indicative of the anti-competitive and laxly regulated landscape:

The OTI report offers a host of state and national solutions to correct these problems. Among them are a revamping of the FCC's data collection practices to include location-level data, prices, and speeds (the first of which is already hopefully underway), the adoption of a standardized "Broadband Nutrition Label" so that customers can more easily compare plans and identify costs, the expansion of the Lifeline program, the banning of landlord-tenant scams and elimination of other practices which result in digital redlining in Multi-Tenant Environments (MTE), and a national law which repeals existing state laws that restrict or prohibit municipal networks.

In the U.S. market, prices vary widely across the country—but municipal networks tend to offer the fastest, most affordable options . . . [They] can challenge incumbent private providers by delivering higher quality and more affordable internet, reaching more underserved communities than private providers would . . . Juxtaposed against the prices advertised by private ISPs in each city, the procompetitive effects of municipal networks are stark. They offer consumers more affordable and faster alternatives than the private market alone.

A Roadmap for Communities

The greatest problem areas according to the report are in cities with between 1,000 and 10,000 households, where 10% are underserved or unserved, and in cities with less than 1,000 households, where a whopping 46% are underserved or unserved. It concludes that “8% of cities, around 1000 of them, are well-served by some form of municipally enabled program.

In response, they offer an accessible but thorough outline of the routes cities can take according to access to capital, existing infrastructure, political will, partnership options, objective, and risk tolerance. Fully owned and operated municipal broadband tops their list of routes for cities who want to maximize community benefits. They also, however, outline the range of other options, including publicly owned-privately serviced networks, hybrid ownership, private open access, and fully private broadband.

One particular selling point of the report is that it offers up a host of detail-oriented but accessible explanatory graphics which would be helpful for city managers, city council, and municipal utility heads in understanding the routes, risks, and costs of community-enabled broadband.

The US Ignite/Altman Solon report makes it clear that, for many cities, the local government will have to facilitate the process if they want to see better connectivity options than currently exist. They acknowledge that it can feel complicated and daunting, and offer some specific suggestions:

Both reports have their limitations. The OTI report includes no data from rural communities, but acknowledges an upcoming report that treats the topic exclusively. The US Ignite/Altman Solon guide, which is full of practical solutions, doesn’t include the significant pushback municipalities often get from monopoly ISPs in the form of predatory pricing, marketing campaigns, and legislation. It behooves communities that want succeed in facilitating networks that benefit the public at large to consider all of the obstacles that they will likely face before beginning the process. Collectively, these two reports offer a wealth of data and suggestions to do so. Download the full reports below.

US Ignite and Altman Solon Whitepaper on Broadband Models