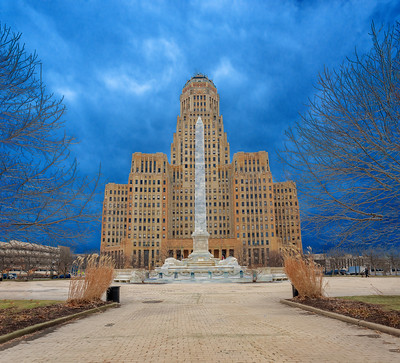 Plans for an open access fiber backbone in Erie County, New York (pop. 951,000) are being readjusted after having been stymied by the pandemic. The county will use Rescue Plan funding to cover the cost of building the backbone, which will be owned by the county and operated by ErieNet, a nonprofit local development corporation. The backbone will make connectivity directly available to anchor institutions and enterprise businesses, but the county hopes the project will draw private providers to build out last-mile infrastructure to residents. With the new fiber ring, Erie County seeks to increase both broadband availability and competition in the area.

The project began in spring 2019, when the county announced its plan for a $20 million open access network, which at that time it was looking to have up and running before 2022. ErieNet’s original plan was a response to an acute need for connectivity among the county’s southern and eastern rural towns, as well as much of Buffalo – despite these areas’ proximity to relatively well-connected wealthier suburban communities nearby. The county is for the most part monopoly domain, served by Charter Spectrum, Lumen (formerly CenturyLink), and in some small patches, Verizon. Verizon has cherry picked wealthier areas like Kenmore, Williamsville, and Amherst, as well as a few blocks in Buffalo by the company’s hub there, but has not found the rural or high-density and low-income areas profitable enough to build to. Relatively smaller providers like Crown Castle and FirstLight have also made infrastructure investments in parts of the county, but do not appear to have expansion plans.

The pandemic stalled Erie County’s buildout plans – supply chain challenges and bureaucracy-related complications have pushed the expected project completion date to 2025, though some customers may be able to connect to the network in 2024. According to the plan, Erie County is poised to become “one of the largest municipalities in the country to operate [a middle-mile, open access] network.” The latest business plan, released in April, lays out about four hundred miles of fiber in a nearly $37 million project that would connect most all of the county’s towns, “as far north as Newstead and Grand Island to as far south as Concord.” The backbone will pass within half a mile of 152 anchor points, “ranging from municipal facilities and sewer plants to libraries, business parks and public safety access points.” The plan, outlined by Rochester-based ECC Technologies, “assumes 40% of these would subscribe to the network [and] that every year 4% of new [the 2,000 total] private businesses within a half mile of the ErieNET lines will subscribe to the county network.”

The project relies heavily on American Rescue Plan Act (ARPA) dollars; $29 million to build the network and $7.7 million to support its operation for the first five or so years. Thanks to the ARPA funding, it will only need to borrow $2.7 million for construction. The network is expected to be self-sustaining after the “launch period,” and does not intend to rely on tax dollars to keep it going.

A possible 54-mile expansion is also on the horizon, which would allow towns that will not be connected by the network’s first construction phase, to get hooked up to the Internet. A number of these communities are in the southern part of the county.

Last week, the county officially formed the Local Development Corporation and named its board of directors, who will help guide the project.

Though the preliminary business plan has been released, ErieNet has yet to demonstrate its plan not only to expand connectivity across the county, but to make it affordable to the people who live there. Buffalo was named the third poorest city in the United States in 2019, with 28.8 percent of residents living in poverty, and the city’s childhood poverty rate is 43.4 percent, or the second highest in the country. In order to serve the county, ErieNet must ensure that residents can actually benefit from the service it plans to offer. The business plan states only that “ErieNET will price its services to be market competitive, but sustainable in order that outside funding or tax-based resources are not required for continued operations.” Exactly how the network will sustain itself financially is yet to be outlined in a more granular business plan.

The business plan also includes marketing to businesses and both fiber and wireless ISPs, which the county is interested in attracting to provide last-mile connections and bring in revenue. Empire, Greenlight and Armstrong are among a few providers who may be interested in connecting residential customers and smaller businesses, but exactly what the county will do to attract these providers remains unclear. None of the existing large ISPs in the area have demonstrated any interest in the last-mile opportunity. Google Fiber has apparently engaged in discussions with ErieNet, but has not offered insight into any particular arrangement in the works. Locals interviewed don’t have much faith that a Google Fiber option would reach beyond the suburban core.

None of Erie County’s communities have expressed intent to build out their own publicly-owned last mile infrastructure, but another city nearby may be embarking on its own municipal project. Jamestown, New York – which we covered here in August of 2021 – has 40% of its population living under the poverty line, already has major incumbent providers in the area, and is considering building out a municipal network. This makes it an interesting case for comparison with Erie County. Additionally, Orleans and Niagara counties – both very rural areas in the northwestern corner of the state  – will leverage $7.8 million in funding from the American Rescue Plan for a network through RTO Wireless. The network will span the two counties and is expected to provide customers with speeds up to 100/20 Megabits per second.