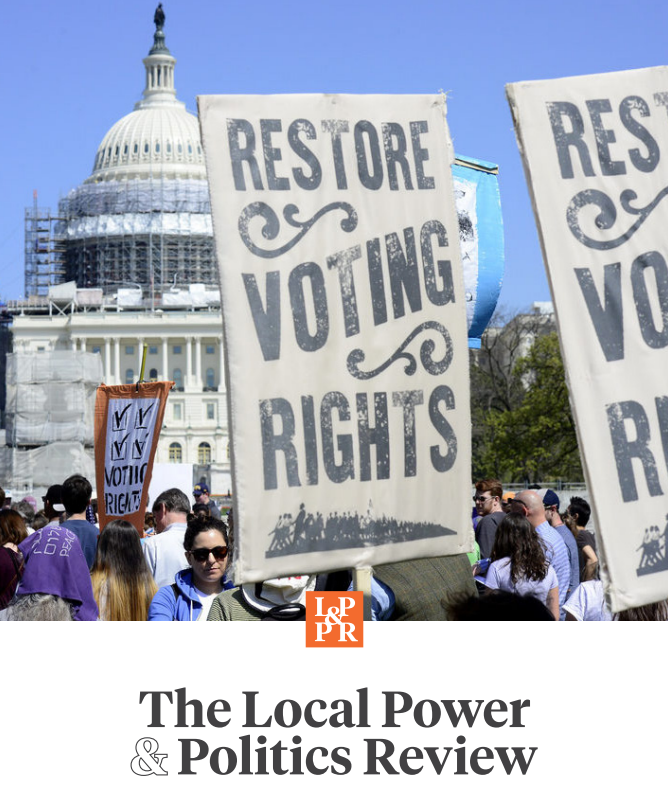 We spend significant time and energy here covering the regressive impacts of state broadband policies which preempt local communities from creating competition and choice as well as connecting the unconnected by building their own networks. Most recently, we wrote about the FCC’s new 5G rules regarding locally owned and regulated utility poles, and the proliferation of small cell sites as mobile providers race to deploy tens of thousands of antennas as part of network infrastructure improvements. Its effects are already being seen in Milwaukee, where fee caps, shorter timing windows, and rights of way exemptions are having negative effects.

But state preemption is a versatile legislative tool that extends well beyond broadband access, and a new report explores not only its increasingly common use but the negative impacts on communities in many instances across the nation.

This is the topic tackled by The Local Power and Politics Review, a joint project by ChangeLab Solutions and the Local Solutions Support Center. Its first annual report, released in November, brings together more than a dozen experts and advocates across an array of fields to address how “[i]nstead of rising above the fray, many state leaders have embraced negativity, taking aim at progressive localities, local leaders, policies, and programs by weaponizing preemption legislation and other means of control.”

The first issue [pdf] offers a “comprehensive look at the wide reach of state preemption in communities across our nation and the effects of that state interference on people’s health, social, and economic well-being” across a host of arenas, including “public health, civil rights and discrimination, environment policy, emerging technologies, housing policy, labor policy, and local fiscal authority.”

But it also points out that the threat of preemption as well as other, less direct expressions of state power to curtail local control (withholding funding, hamstringing program administration, etc.) by state legislators, regulators, and judges can create a landscape which prevents cities from meeting local problems head on and pursuing more equitable outcomes for all.

In still other areas, like housing, state preemption measures (in places like Massachusetts and New Jersey) intended to create more affordable options have, at best, not solved the problem while further restricting local control.

“The big winners,” the report concludes, “are the various industries that benefit from fewer regulations and restrictions, and state politicians who secure favor among their peers, funders, and like-minded constituents – most of whom live outside of preemption-affected areas.”

ILSR’s Christopher Mitchell and Hannah Bloch-Wehba from the Texas A&M University School of Law contributed to this first issue of the publication on how preemption factors into the gig economy, municipal broadband, and police surveillance.

They write about the regulatory gap created by preventing communities from exercising due diligence in oversight for the likes of Uber, Lyft, AirBnB, and others. In the case of the former, it results in a lack of authority to, for instance, require ridesharing companies to do criminal background checks on drivers. The essay offers examples in Florida, California, North Carolina, Pennsylvania, and more.

The essays also writes that those states which preempt local authority to build community networks directly contribute to lower rates of broadband access, which falls disproportionately on vulnerable populations, pointing to North Carolina as an example. By happenstance, a recent WRAL news story reported that its preemption law in 2011 was "so effective that the North Carolina Utilities Commission, which can approve new government-backed Internet [access] projects if conditions are met, had to comb through its files this week to say whether anyone had even asked to try."

By contrast, states have, the report argues, generally left the regulation of policing technologies to localities to deal with as they choose, from surveillance to body camera footage to data retention.

As this first issue of The Local Power and Politics Review shows time and again: localities know best their local needs, resources, challenges, and talent. Consideration of preemption in all arenas and at all levels should take place with equity and racial justice frameworks, so that the policies we enact address rather than amplify or ignore the structural inequities which exist:

Reliance on these political tools, rather than on solution-oriented political tools of compromise (bargaining, collaboration, negotiation, etc.) often has devastating effects that are borne disproportionately by the most vulnerable people in our communities, including individuals of color, low-wage workers, the LGBTQ community, children, and women.

Read the full issue [pdf], or download it below.