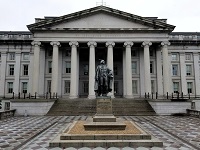 The day after the U.S. Treasury published the Interim Final Rules on how Coronavirus relief funds in the American Rescue Plan Act can be spent, we sounded the alarm because it appears the rules, if finalized as is, would significantly limit local communities’ ability to invest in needed broadband infrastructure.

On Tuesday, May 25, Sen. Wyden sent a letter to Treasury Secretary Janet Yellen urging her “to ensure any community with service that falls below (the Treasury’s) own standard of 100 (Megabits per second) Mbps upload and download speeds is eligible for funding.”

Even as the Treasury acknowledges that families really need 100/100 Mbps service, as the Interim Rules are currently written it suggests communities are expected to focus on areas that do not have 25/3 Megabits per second (Mbps) wireline service “reliably available.” About 90 percent of Americans have 25/3 “available” to them by flawed federal estimates, although millions lack service because it is unaffordable or effectively unreliable. And there is no standard for reliability that communities can measure against.

The Eshoo/Booker letter is particularly salient on this point:

Furthermore, expecting municipalities to determine what areas are ‘reliably’ served by 25/3 is itself a major obstacle. For years, the federal government has failed to develop a map of where broadband at 25/3 speeds is available and one still doesn’t exist. Analyses of private datasets consistently show that the FCC’s maps are unreliable at best. It’s unreasonable to expect a city to determine if and to what extent its residents are served by 25/3 when the federal government has failed to do so for years.

While Wyden’s letter does not focus on the omission of what “reliably” means in the rules, it does speak to why 25/3 is not sufficient to meet current and future connectivity needs of U.S. households.

“The mass adoption of video calling, streaming, and other bandwidth-intensive apps by Americans during the COVID-19 pandemic has made it clear that miserly speeds and data caps are holding back telework, remote education and telehealth capacity,” Wyden wrote. “Simply put, it is not possible for a family of four to telework and engage in remote schooling while sharing 3 Mbps of upload bandwidth.”

“We applaud the Interim Final Rule’s encouragement of local governments, nonprofits, and co-operatives that administer networks,” the lawmakers write. However, the letter continues, “the 25/3 standard is insufficient and it has been for years… If Treasury sets any threshold, it should be set to the higher standard of 100/100, which is consistent with the detailed discussion Treasury lays out regarding the needs of Americans. This one change of removing the 25/3 limitation on broadband projects will enable many more communities to use the Coronavirus State and Local Fiscal Recovery Funds to expand access to high-speed broadband, should they so decide.”

In Wyden’s letter, he also points to another blind spot with the Interim Rules: “to assume that communities with speeds at or above 25/3 Mbps are adequately served – and to ignore cost as a factor in this consideration – would be severely misguided, and it ignores the reality on the ground for American students, working families, and businesses.”

To put it in plain terms, Wyden’s letter says: “To be accessible, broadband must also be affordable.”

Affordability was a key consideration in Wyden’s home state when the city of Hillsboro built its municipal fiber network, HiLight, which now offers its subscribers symmetrical 1 Gigabit per second (Gbps) service for $55 per month with eligible low-income families getting gig speed service for $10/month.

Wyden concludes his letter to Secretary Yellen with a cautionary note, highlighting the possibility that if Treasury does not address these issues in the Final Rule, “millions of Americans who lack access to broadband at speeds that Treasury has determined are necessary will be denied the opportunity to finally get fast, affordable and reliable broadband.”

One specific fix to the Interim Rules we have suggested is to use the word “underserved” properly by defining it as areas with more than 25/3 and less than 100/100, while requiring local governments to prioritize “unserved,” as it fits within statute to allow communities to invest in underserved areas if they decide it is that important after the pandemic.

In conversations we have had with city leaders across the country, there seems to be a growing consensus that the Final Rules should allow local municipalities – who have a much better sense of the on-the-ground reality – to define what “unserved” and “underserved” means in their respective communities.

In any case, this debate will not end with how coronavirus relief funds in the American Rescue Plan Act can be spent. The question of which areas are considered “unserved” and “underserved” is front and center as the Biden administration and Congress wrestle over the President’s proposed infrastructure proposal, the American Jobs Plan, which includes $65 billion for broadband infrastructure investments. (Democrats have been pushing for a $100 billion investment. Republicans countered with $65 billion, which Biden has agreed to concede).

The Need for Speed

And insofar as the FCC’s definition of broadband goes, we may see a speed increase when all of the sausage-making is over as Wyden isn’t the only Senator who thinks the federal government should increase the current 25/3 minimum broadband speed. In March, a bipartisan group of legislators– including Sens. Michael Bennet (D-Colorado), Joe Manchin (D-West Virginia), Angus King (I-Maine), and Rob Portman (R-Ohio) – sent a letter to the FCC (and several other federal agencies) requesting the FCC change the minimum broadband speed to 100 Mbps symmetrical.

“We must learn from our experience during the pandemic and raise federal standards for new broadband service to require low latency, high reliability, and speeds that meet our expected 21st century needs,” they wrote.

Inline image from CC BY 2.0