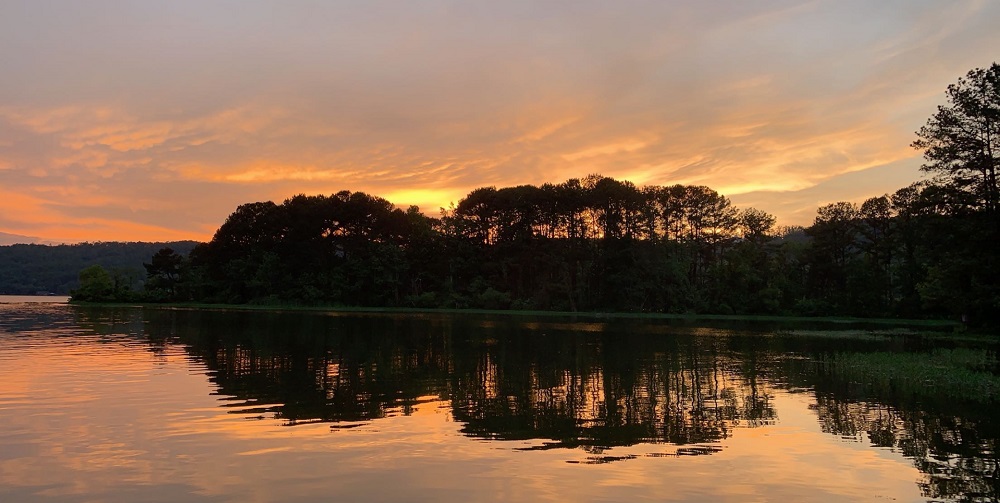 Talladega, AL has long been known as the epicenter of NASCAR, a sport synonymous with speed. In 1987, Bill Elliot set the fastest recorded time of 212.089 mph on that very track.

Unfortunately, many residents in Talladega County and surrounding counties have long gone without fast connectivity, with average speeds as low as 5 Mbps (Megabits per second).

CVEC often holds events at the Superspeedway, but for this event they wanted to make sure that since people were gathering, social distancing was possible. Also they wanted to communicate a message.

“It also served as a good backdrop for what we were trying to communicate, which was, we’re going to be provided the fastest broadband service in our area,” Jon Cullimore, CVEC Manager of Marketing and Member Services, told us in an interview as the cooperative prepares to embark on a fiber build intended to bring fast, affordable Internet access to everyone in its electric footprint over the next four years.

It all started in 2019 with feasibility studies conducted by two different firms. Both found a profound lack of broadband service throughout CVEC’s service territory, which is situated east of Birmingham.

When the studies were completed, CVEC quickly put together a comprehensive information packet for members to get educated before their annual meeting last September. The members were asked to vote on whether or not CVEC should form a new broadband subsidiary and embark on a new phase of life.

“We got the word out, and we had a record attendance at our annual meeting. We’ve never had that many members show up before,” Cullimore said. “I think we only had 12 ‘no’ votes out of all the [more than] one thousand people that showed up.” CVEC quickly got to work with construction starting after the meeting and is close to finishing the first phase of the network’s backbone (see blue region in map, right). The network will be entirely fiber, and altogether the cooperative is expecting to hang over 1,300 miles on existing utility poles.

It plans to continue construction throughout the spring and summer, transitioning to residential drops with an eye towards bringing the first members online as early as September. With roughly 17,500 member-owners at present, it’s hoping to have everyone in its service territory live within the next four years.

Fuller announced that the new subsidiary, Coosa Valley Technologies, will offer residential tiers starting at 300 Megabits per second (Mbps) symmetrical at $60/month, 500 Mbps symmetrical at $80/month and 1 Gigabit per second (Gbps) for $100/month. It is working on the pricing for the 10 Gbps tier that will be offered to businesses, and the network hopes to eventually be able to offer even faster speeds.

“What really made us jump on the wagon and get pushing really hard was the [upcoming] RDOF funding,” Cullimore said.

CVEC received $2.1 million in RDOF funding when results were announced in December 2020, but the cooperative projects it will spend as much as $55 million for the project, the vast majority of which will be funded through loans from the National Rural Utilities Cooperative Finance Corporation. While CVEC was able to make a business case for the new network with a take rate of around just 20 percent, officials believe that with all the feedback and excitement around the network the take rate will be nearer to 40 percent and perhaps as high as 60 to 70 percent, especially in the “very rural” areas.

Alabama was one of the states that got creative with CARES Act funding by creating the Alabama Broadband Connectivity for Students program to try and address the lack of Internet access for students during the pandemic. The program, developed by Alabama Department of Economic and Community Affairs with deployment help from CTC Technology & Energy, allowed families that qualified for the National School Lunch Program to receive vouchers to cover the cost of equipment, installation and Internet service through ISPs that partnered with the state for the program. More than 200,000 students have been connected through the program which has been extended through June 2021.

While this has helped tens of thousands of families across the state get immediately connected, CVEC is looking to provide a long-term solution to something that has been a longstanding problem in the areas it serves. It's also a fitting return to the cooperative's roots: CVEC was formed in 1939 by people who saw a real need to build out electric power lines to rural communities, and it found a way to provide power to six counties - Talladega, St. Clair, Shelby, Calhoun, Clay, and Etowah - when no one else would.

Stepping in to Fill the Gap

Generally, almost a quarter of rural Americans lack access to fixed terrestrial advanced telecommunications capability, according to a recent report by the Federal Communications Commission.

Talladega County is hopeful that the faster and more reliable Internet service will bring more commercial and industrial development. And, like many other communities across the country over the last year, the local officials are hopeful this will help families that have not been able to participate in virtual learning.

Note: The original version of this story said that CVEC won RDOF funding 2019. We regret the error.

Inline mape of Coosa Network build from the CVEC website.