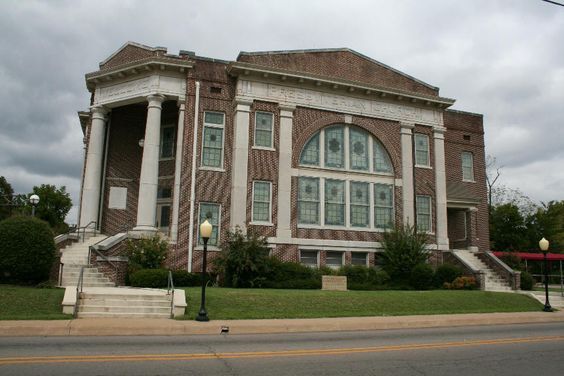 Clarksville, Arkansas, began their journey toward better local connectivity to enhance electric utility efficiencies. Four years after making the choice to deploy fiber, the town has chosen to use that fiber to offer Internet access to the community. Gigabit connectivity is on the way to every premise in Clarksville.

On June 1st, about 400 people gathered for an event to celebrate three achievements for Clarksville: a new high school campus, re-branding of the municipal utilities, and a fiber splicing to kick-off their upcoming citywide Fiber-to-the-Home (FTTH) deployment. They enjoyed free food, tours of the new facility, and learned more about the new infrastructure that will bring fast, affordable, reliable connectivity to residents and businesses. John Lester, General Manager of Clarksville Connected Utilities, told us about the event and the new project.

As CCU has worked to update connectivity for the town of around 10,000, Lester and other leaders at the utility have recognized that it's also time for a re-branding. After more than 100 years, the Clarksville Light & Water municipal utility retired “The Waterdrip Guy” and adopted a new name and a new logo. In order to reflect the city’s transition to a more forward thinking and competitive attitude, they transitioned to Clarksville Connected Utilities (CCU); the utility Commission approved the change in March. Their new logo uses the utility locate colors.

From Light to Light-Speed

In 2017, we reported on Clarksville’s investigation into the possibility of deploying fiber for SCADA operations and how they kept their eye on future uses as part of the decision making process. When determining how best to use the fiber and its extra capacity, city leaders decided to allocate 12 strands each for different specific sectors in the community. They determined that 48 strands would be enough for the electric utility’s needs and chose to allocate 12 strands each for educational facilities, healthcare institutions, public safety needs, and government facilities. Almost 200 strands were allocated for future uses.

It was about two years ago that the city’s municipal network began to connect the Clarksville Public Schools with a 10 gigabit wide area network (WAN) and 1 gigabit Internet access. The school also gained access to the city utilities’ network operations center for the location of back up servers. “We’ve got our own ‘Clarksville Cloud,’ so to speak,” says Lester. 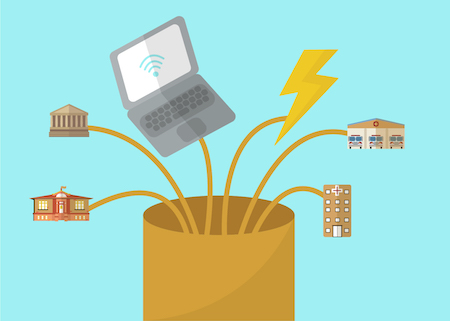 Soon after, CCU established themselves as an Internet access provider and have connected approximately a dozen local businesses and organizations. CCU served several of their beta customers for more than a year, taking advantage of the opportunity to work through any problems. In addition to the school district, they’ve served the regional medical center, and Johnson County facilities. Retail beta customers have included the local cinema, law offices, retail shops, and the University of the Ozarks. We shared the story of 25 new positions that started in Clarksville through a partnership between the network and the Clarksville Regional Economic Development Organization. CCU also leased dark fiber for the County Assessor, and established point-to-point wireless for at least one local business.

The utility has engaged in two surveys in order to help determine if a FTTH venture would obtain adequate support in Clarksville. Speed and reliability came in as the top issues that concerned respondents. CCU asked questions such as the importance of bundling, how many households were cord cutters, and how many already streamed or if they were even able to do so with current Internet access. CCU wanted to know what factors might compel potential subscribers to switch from their current ISP to a municipal network. They discovered that people in Clarksville want speed, reliability, reasonable prices, in-home Wi-Fi at no extra charge, and local service. Around 65 percent of those who answered the survey said they’d switch in order to subscribe to a local ISP and almost 50 percent said that they wanted CCU to contact them regarding Internet access from the utility.

Deciding to Do It Themselves (Mostly)

At one point in the process, CCU considered working as a wholesale provider and working with a retail ISP which would offer Internet access to the community via publicly owned infrastructure. Upon closer examination, CCU determined that a wholesale approach wouldn't be financially favorable to the community. They anticipated rates would be higher and working with a private provider would add a layer of complexity that CCU leadership felt would not benefit the vision they had for the network.

In order to offer VoIP services, however, Clarksville wanted to work with a company that has experience and selected Pinnacle Telecom of Fort Smith. Residential customers and small businesses will interface with CCU, but larger businesses that need more complicated voice solutions will work directly with Pinnacle.

CCU came to the decision to operate as an Internet access provider after extensive study and deliberation. After a business case study with CCG Consulting, a complete design with Finley Engineering, and careful scrutiny of both, they better understood some important questions that needed to be addressed before moving ahead.

First, the utility needed to determine whether or not they should offer video as part of the service they planned to offer. Increasingly, communities that are investing in fiber optic networks are opting not to invest in the equipment and processes necessary to provide video to subscribers. With so many options available to stream, cable TV is losing popularity. Clarksville won’t be offering video as part of their services and will instead provide information and resources to subscribers that will help them discover new streaming options. CCU might offer workshops on streaming and promotions that offer free streaming devices as marketing tools.

Second, how fast would Clarksville deploy the infrastructure? CCU and the city decided that deployment should happen quickly. Altice had acquired Suddenlink, the incumbent cable Internet access provider, and CCU wanted to be prepared in case Altice might try to deploy faster than CCU in order to snatch up subscribers. The city decided on a two-year deployment strategy.

In order to deploy the network in two years, Clarksville needed to be able to issue revenue bonds to finance the project, which when complete will cost approximately $10 million. Before moving forward, CCU needed to resolve the uncertainty surrounding their legal authority to bond ito develop broadband infrastructure. In Arkansas, communities with electric utilities can offer telecommunications services, but the law has been unclear on the ability for those same communities on bonding.

The city issued an RFQ for a law firm with knowledge of the matter in order to find a legal opinion. They ultimately hired a firm that had taken on a former Windstream counsel who was able to contribute to the analysis so the firm’s bond attorneys could render an expert opinion. Attorneys favored Clarksville’s authority to bond for fiber optic infrastructure. 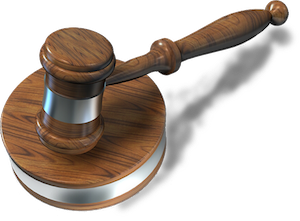 This past legislative session, restrictions in Arkansas eased somewhat when lawmakers made changes to allow local communities to apply for federal grants. In another positive development, the state legislature clarified state law so municipalities can bond to finance broadband infrastructure. SB 471 passed and was adopted into law in April.

Read the bill, which was part of a larger piece of legislation, here.

At the end of April, Clarksville issued revenue bonds for a 15 year term. The issue included $7.5 million for the fiber project and included additional funding for equipment they need for their smart grid project, and equipment for the water treatment plant.

The utility plans to bring FTTH to every premise within the city limits and fixed wireless to other locations that are outside the city and more difficult to reach. Most households outside of the city have no options other than satellite.

In January 2019, Lester felt confident that the project would move forward and on the CCU Facebook page he encouraged residents to go to the website and register their interest — within seven days, 300 people had signed up; since then, an additional 200 have registered. With a strong early interest, finances lined up, and support from the CCU Commission Board, Lester feels Clarksville is moving in the right direction.

The utility has decided to use crowd fiber to determine in what order of progression they will build in the community’s fourteen deployment areas. By focusing first on areas where they know people are interested in taking service, CCU can expect more revenue sooner and word of mouth to help spread the news about the service.

Rates for various tiers of service still need to be approved, but the utility plans to offer symmetrical gigabit access with no data caps for around $89.95 per month. There will also be a symmetrical 100 Megabits per second (Mbps) option for approximately $44.95 per month and possibly two other speed tiers in between. 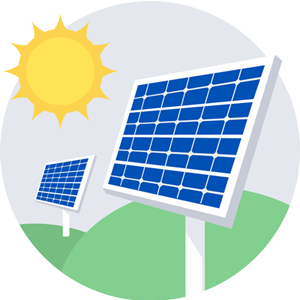 The city will offer a range of services for businesses, including the ability to order service at symmetrical 500 Mbps that bursts to gigabit capacity for around $300 per month. CCU will offer eight tiers to commercial subscribers, including several lower priced options in for small businesses, such as a symmetrical 100 Mbps at $59 per month. Larger entities can get dedicated connections up to 2 gigabits. No data caps apply and there will be no connection fees.

Learn more about the project at the Clarksville Connected Utilities FTTH Information page.

Using Light for More Than Connectivity

Clarksville is also in the process of building its second solar power plant, which will make it the first city in the state where its city asset needs are met with 100 percent renewable solar energy. The solar projects and the broadband network are both designed to help attract new businesses and reduce costs for folks in Clarksville. In a recent Arkansas Business article, Lester commented:

"The effort is designed to position Clarksville as a town with the quality of life of a small town, but one that can think and do big things," Lester said. The original [solar] plant was expected to "save our customers approximately $500,000 annually while growing our existing renewable generation supply portfolio."

Construction on the fiber network should start in July and Lester anticipates that the first subscribers will be online in October.

Lester shared some photos of the June 1st event to celebrate the new high school, re-branding, and fiber splicing: 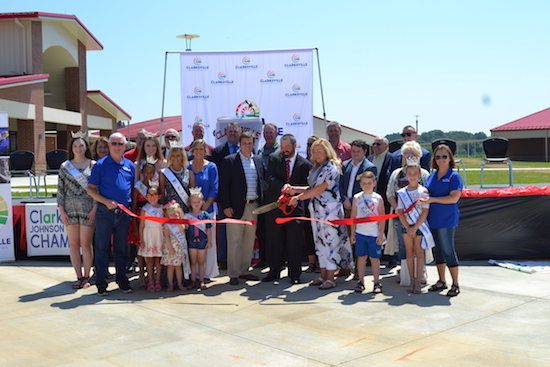 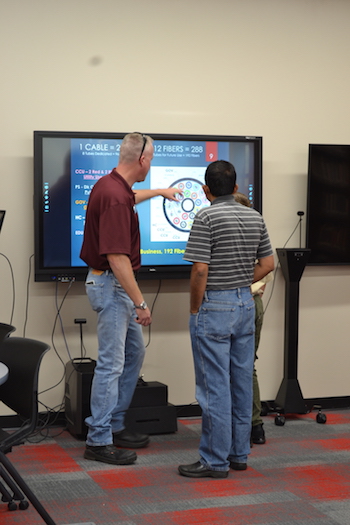 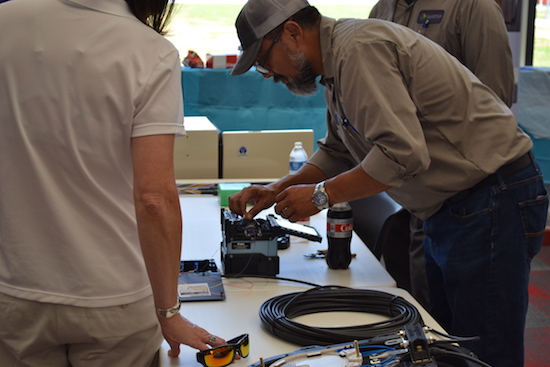